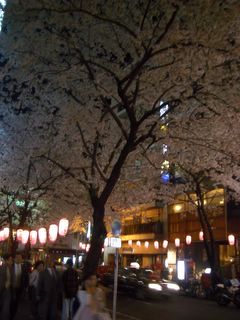 Most of the rock shows I go to in Tokyo take place at the Club Que in Shimokitazawa, and there's a reason for that: its managers book some of the most interesting, innovative, highest quality Japanese bands. Tonight was another reminder why I love this dinky basement club. The three bands that played, Tornado Tatsumaki, Travelling Panda and On Botton Down, were all wonderful.

The three's style might be called progressive pop, as opposed to progressive rock. Their songs are approachable, gorgeous and swinging, but they always have a twist, such as unusual chords or eccentric rhythms. Theirs was pop that rocked and had brains, and I enjoyed it tremendously.

On Botton Down is a girl singer and guy guitar duo, and they played with supporting musicians. Maybe I use this word too often to describe Japanese bands, but they were a quirky bunch. At the start of the show, when the drummer took a while to appear on stage, the other members said he was just now in the midst of, er, the final act in the digestive process... The drummer wore about half a dozen T-shirts, and stripped off one T-shirt at the end of each song. Despite those and other eccentricities, on botton down's performance was a delight, melodious and adventurous. 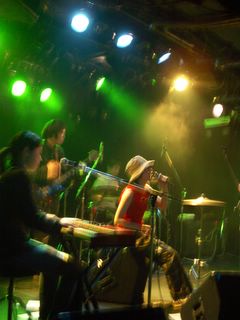 On Botton Down at the Que.

Travelling Panda, not to be confused with Texas Panda, was a girl singer/girl keyboard/guy guitarist trio, also playing tonight with support musicians. They mixed pop, funk, hiphop and fusion jazz sounds in a cauldron of rocking noise. The guitarist looked like a tall Japanese Buddy Holly. The singer marched back and forth on stage in vaguely hiphop way, holding the mike parallel to the ground rapper-like, but in spite of that she sang in a pleasant, girlish voice.

I'd come to see the last band, Tornado Tatsumaki ('tatsumaki' means ... 'tornado'. So their name is 'tornado tornado', or, perhaps, 'tornado times two'?). They were the loudest of the three bands, and at times their music dissolved into Sonic Youth-like distorted chaos. The frizzy-haired singer (all three of the bands had female vocalists), wearing a strange white blouse and shorts outfit that puffed up in weird places and seemed on the verge of falling apart, danced in a puppet-like hard-jointed way, but she had a lot of stage presence and a strong voice.
Posted by Ken M - Japan Live at 8:24 AM