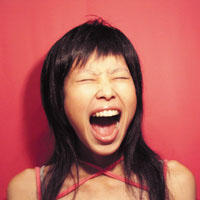 Makes You Dance! is the brilliant second album by Limited Express (has gone?), a Japanese trio who plays eccentric rock similar to groups like the Ruins and Boredoms. This album would be worth buying for the song “Tiger Rock” alone, a weirdo music classic, even if all the other songs were duds. Fortunately, Makes You Dance! contains many more great innovative, rocking moments, making it a must-listen for music lovers with adventurous tastes.

“Tiger Rock” reminds me, strangely, of a song from a completely different musical genre: Ice Cube’s gangsta rap masterpiece, “Jackin’ For Beats”. Though a rap song, “Jackin’ For Beats" is actually more of a showcase for imaginative, ever-changing sampling, that sounds great as a whole. Similarly, you never quite know what will come next in “Tiger Rock”: the song starts with a full-blast garage rock guitar part, followed soon after by female vocalist Yukari squealing, “Pi! Pi! Pi! Pi! Pi! Pi!”, followed by her singing of lyrics that are either highly muddled English or simple gibberish, and then the climactic line, “Six! Five! Eight! Three! Nine! Four! Two! Seven! One! Zero! Tiger Rock!”, and then much more.

What in the world do those numbers mean? And that is “tiger rock”, and what is this song trying to say? All questions that might come up listening to the song, but in the end “Tiger Rock” has so much energy and so much eccentric artfulness that the answers don’t really matter. It’s a wild, not-quite-three-minute musical amusement park ride.

And “Tiger Rock” is but one highlight in this album that tries out new rock music things and sounds great doing so. Maybe the one song in this album where Limited Express seems to have gone too much out on a limb is “Hopping”, which features Yukari counting numbers slowly, sort of like a Sesame Street introduction to numbers. It’s probably not a ‘song’ you’d want to hear a hundred times. But the album as a whole, with its screams and nonsense lyrics and unpredictable but rocking parts, is one you just might want to listen to that many times and more.

UPDATE: Just found out you can sample all of the songs from Limited Express's two albums here at YesJapan. Check them out!
Posted by Ken M - Japan Live at 11:41 PM