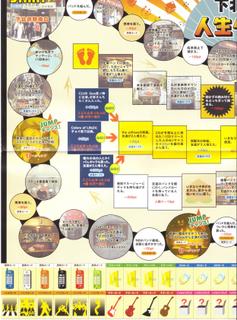 In a stack of fliers for upcoming rock shows you always get at music clubs in Tokyo, I found something out of the ordinary.

It was a board game printed on a piece of paper. It looked like the Game of Life, but what it was would be more accurately described as the Game of the Shimokitazawa Music Scene.

Club Que created the game for fun for its 11th anniversary. The game’s object is similar to the Game of Life, but rather than trying to retire rich like the Game of Life, in the Que game the aim is to make it big in the Shimokitazawa club circuit, and more specifically, to play a sold-out one-band show at the Que itself (the Que is considered one of the top clubs in Shimokitazawa).

Like other board games, each player rolls a dice, and depending on where you land you can add or subtract points, and other things happen, mostly having to do with Shimokitazawa, the artsy Tokyo neighborhood.

For example, if you land on “Work part time at First Kitchen”, you get 100 points, presumably your salary. If you land on “Watch a play at Honda Theater”, on the other hand, 40 points is taken away from you, for the ticket charge. You can also “Buy a T-shirt at SAKAEYA. Become stylish” at a cost of 50 points. On the darker side, you can “Become tired with life, and return to your hometown. Lose all friends”—and also lose two turns.

This is Shimokitazawa, though, so after you land on “Form a band”, you can play at live houses like the Yaneura, 440, Cave Be, Garage, Shelter, Club 251, and of course, Que itself, and at each, you get 20 points times the number rolled on the dice, if you’re already in a band.

To get to the inner circle that leads to a solo Que show, you need to land on a “Jump Chance” space, which represents various big deal events for bands. For instance, one “Jump Chance” is “Get a call on mobile. Receive offer from K.O.G.A. to release a CD of your band” (with a picture of K.O.G.A. Records owner Mr. Koga making a call on a mobile phone). If you have a Mobile Card and Band Card, you can then jump into the Shimokitazawa band scene’s inner circle. (Mr. Koga, however, isn’t always good luck in this game. There’s one space you can land on that says, “K.O.G.A. gets you drunk. Lose you wallet”—and also, 100 points.)

For the grand finale, when you land on “One-Band Show at Club Que”, if you have ten Friend cards, or if you roll a “Que” on the special dice, your solo show sells out, and you get more points the sooner you do that.

What’s cool about this game, besides that someone actually took the time to make it (and must have had fun doing so), is that the game gives a good summary of the Shimokitazawa music scene. Live houses like the Que, Shelter and Club 251 compete with each other, in theory, to attract music fans, and it’s strange in a way that the Que gives free advertising to the other live houses in the form of this game.

But then these clubs are part of a community, and the live house staffers hang out with each other, compete with each other in sports tournaments, and must have a good laugh seeing their clubs featured in a board game created by another live house (though, all that doesn’t mean each club doesn’t try to book the best bands to get a bigger crowd than any other club).
Posted by Ken M - Japan Live at 7:57 AM