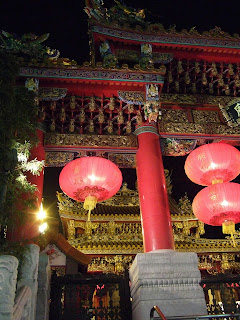 I was supposed to see Mix Market and a promising young band from Aichi prefecture called SpecialThanks tonight in Yokohama, but I got completely lost on the way to the club near Chinatown and ended up missing it. My Tokyo live house knowledge doesn't extend to Yokohama, and I also have a pathetically underdeveloped sense of direction (for example, after having been there several times, I still managed to get lost on the way to the Basement Bar in Shimokitazawa, with a friend in tow...). The venue, F.A.D., I'd been to a few times before, but my mistake was to take the Tokyu line rather than the more familiar JR; I became disoriented emerging from a strange train station, and the vague, scribbled map I brought along didn't help matters. Soon, I was wandering deep in the belly of the Yokohama Chinatown, realizing for the first how big it was. Making things worse, on this first day of a three-day weekend, a significant chunk of eastern Japanese households appeared to have decided to get Chinese food in Yokohama, and the crowds slowed the search. After doing a few laps of the town and taking in the sights, I concluded that the live house probably won't be found anytime soon, and called it an evening.

It was sad because on the way over to Yokohama I listened to Mix Market's 'Shiawase No Elephant', was reminded what a great song that was, and was hoping it would be performed. SpecialThanks also seemed interesting and I didn't know how often they made it up to Tokyo.

Let this be a lesson for visitors planning to catch a gig in Tokyo (or Yokohama)...The clubs are often in obscure buildings in alleys in the middle of nowhere, and the city is laid out in a chaotic fashion as it is—apparently it was designed to get invading armies lost, something that I have no doubt is historically accurate. You need a good map for the smaller live houses. Study up on Tokyo Gig Guide.

Anyway, does anyone know how to get from the Motomachi/Chinatown station to F.A.D.? Should I have even been walking through Chinatown in the first place??
Posted by Ken M - Japan Live at 5:46 AM