Miniskirt At The Apple House, Or Hut Of Bells

After seeing Japanese-German indie pop band Miniskirt for the first time in years last night, I was exploring the Web and unearthed this brilliant video of theirs. I love the part from 0:29 to 0:34 where band leader Edgar is singing at a sloping street of old homes somewhere, and a considerate Japanese lady in the background, seeing that a foreigner is being filmed, immediately moves out of the way to give the camera an undisturbed view. The cut at 0:24 to a cheering audience following footage of one of their shows is also inspired.

Miniskirt's Edgar, universally and affectionately described as a henna gaijin—a weird foreigner—is a film buff. He bought a projector so he could watch his one-movie-a-night on a big screen at home. He also bought a $5,000 Sony video camera to help make videos like 'Read Each Other's Minds', above. When I saw him at the show in Ikebukuro, he was setting up that camera on a tripod to film his show. Seeing me, an old acquaintance, he assigned me to be his band's video cinematographer, a few minutes before the gig was to start. I hadn't touched a video camera for decades, but I think I did OK—the only problem being that I didn't know that you could move the camera up and down in addition to sideways on the tripod, severely curtailing my ability to zoom in on the performers, and also limiting the camera moves to a monotonous left-to-right, and then right-to-left again. The Last Waltz, it was not. But maybe it was fine as a minimalist, indie effort...? 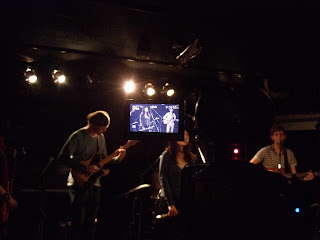 The venue of the event was a new cafe called Ringoya in Ikebukuro, the name sounding like Japanese for 'apple house', but rendered in the kanji as 'the hut of bells'. It was a comfortable cafe, all the guests asked to take off their shoes at the entrance like at a regular Japanese home, and good curry was apparently served, though I didn't try it myself. Its only problem, which it shares with similar venues, is it becomes cramped right away when people start coming in because of all the tables and chairs, and it was packed last night. 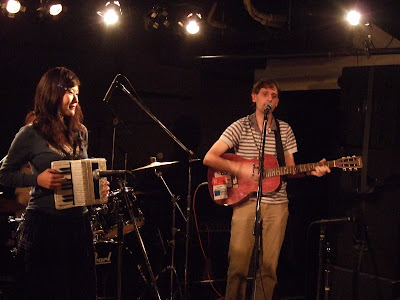 Miniskirt's Edgar had come up from Kyoto, where he's now a serious member of the Japanese academia, the other part of his life when he's not busy composing great indie music. Also performing were the duo Loyal We, Lost In Found, 4 Bonjour's Parties, and, from Australia, the Motifs (the wind and vibraphone section of 4BJ pictured below). 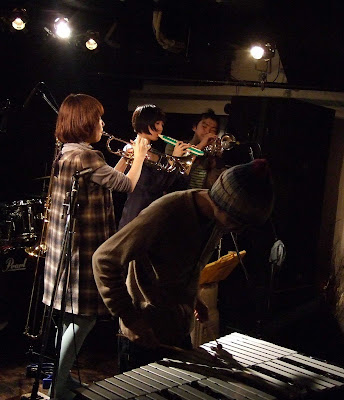