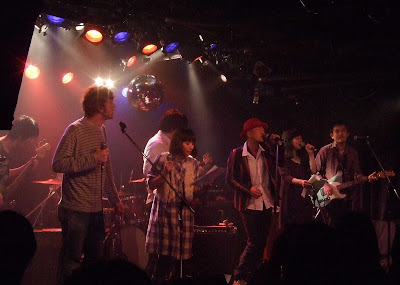 Every year, on November 26, advantage Lucy, Vasallo Crab 75 and other bands gather together for a musical event called Munekyun Arpeggio, which celebrates the life of Takayuki Fukumura, guitarist and founding member of Lucy and VC75, who passed away on that date in 2003. 'Munekyun' was a favorite word of Fukumura's—it's that feeling you get when a cute or lovely thing bulls-eyes your heart. And the pop arpeggios that he wrote still make people feel munekyun. This year at the Que for the event were Karenin, Swinging Popsicle, and, of course, advantage Lucy and VC75.

All throughout the event there were subtle reminders of Fukumura's life. Advantage Lucy guitarist Yoshiharu Ishizaka played a cheap purple guitar and red amp that Fukumura once used. He played all of Fukumura's arpeggio parts. You could see vocalist Aiko become a little tearful while singing their newest song, “Shiroi Asa”, which she dedicated to him that night, and which contains the line: “Itsumo omotteta yorimo, kimi wa zutto soba ni itanda (much more than I always thought, you were always close by)”. Vasallo Crab 75 performed one of their best songs with a signature arpeggio part of his, “Vicious Circle”, from the album “Breathe”, the last VC75 album that Fukumura took part in. At the end of the show all the musicians got together to play a couple of his songs that they dug up as demo tapes left behind in his house. They joked that, by performing his unreleased songs like this they are making him into some sort of legendary figure, like John Lennon, even though he was a normal, funny guy, who, whenever he ordered ramen would transform the noodle soup into what looked like a failed chemistry experiment, dumping in vinegar, pepper, red ginger and so on until the soup's color was unrecognizable, and that's the way he liked it.

It was one of those rare, miraculous events where every act was excellent: the mellow pop/folk of Karenin (its singer Mike Matuszak also is a member of Tokyo indie pop group Lost in Found); the super-smooth R&B and rock of Swinging Popsicle; the sublime guitar pop of advantage Lucy; and the crowd-moving funk/pop of Vasallo Crab 75. A few times the musicians said they thought Fukumura was there listening to the performance, and I got the feeling that wasn't just a figure of speech but that they meant it.
Posted by Ken M - Japan Live at 9:30 PM