The Primrose at Shibuya O-Nest 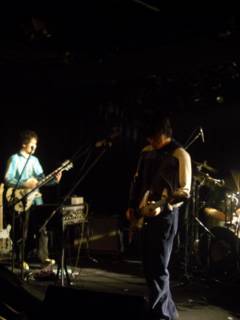 The Primrose at the O-Nest.

Space joy ride music. The type of music I’d like to listen to as I drive my Toyota space-station-wagon around the Solar System. That’s what I had visions of as I listened to the Primrose, a Tokyo rock band, at the Shibuya O-Nest. (Note, I’d had a few beers by the time Primrose hit the stage.)

I’d seen the Primrose open for Luna’s Tokyo tour a few weeks back, and was much more impressed by them than the headline band. Tonight they were great again. Guitarist Keiji Matsui started out playing solo, strumming passages on his guitar that were then placed through various echo-making gadgets to create a repetitive, trance-inducing sound. Like a kid with a box of toys, Matsui fiddled with the dials on his effect pedals and echo device to come up with the sound he wanted.

From the second song, three very serious looking musicians came on stage and played the drums, synthesizer and another guitar (they didn't smile at all during the set). Their music was experimental and novel, but it rocked as well, and the crowd swayed to it. Applause seemed an inadequate way to show appreciation for this new-sounding music. (You can listen to samples of their music on their home page.)

The Primrose has been around for a long time, but the only official member now is Matsui, after the departure of the drummer and bassist. I’ve heard that Matsui is in his 40's, but he doesn’t look it at all. Wish I could be half as cool as he is in a decade’s time.