Rocking in Yokohama & Takadanobaba (In 1 Day) 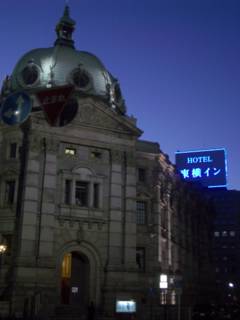 Yokohama, Japan’s second most populated city, is less than hour away by train from central Tokyo but has a much different feel. It’s a port city, so there’s the Pacific Ocean to look at. There also seems to be more open space there than in cramped Tokyo. And there are many old European-looking buildings, a reminder of the city’s history as a treaty port.

At one such old building was held an indie pop mini-festival, featuring nine Japanese bands playing in an event that stretched from 3 in the afternoon to 9 at night. The building, called BankArt 1929, was once a Fuji Bank branch, and now is used as a performance space. 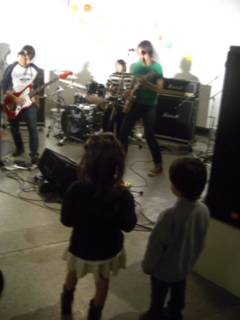 I arrived at the old bank building around 3:30, in time to catch Miniskirt’s set. The stage was one corner of the big hall that appeared to be the bank’s lobby, with marble walls and pillars. The rock music echoed in the spacious hall, traveling up to the high ceiling and bouncing down, maybe annoying some Ghosts of Bankers Past on its way.

The event was a mellow affair. Kids ran around and people sat and chatted between sets, about half or more of those people being musicians in one band or another who all knew each other. During the three hours I was there I especially enjoyed the sets by Miniskirt, led by the German Japan-resident Edgar Franz, a band named Clean Distortion, and Orang, who I saw at the Fukumura memorial show last week. 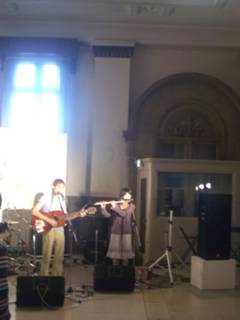 I didn’t get to catch two bands I like, Lost in Found and Vasallo Crab 75, at the very end of the event because I had to head back to Tokyo in the evening to see a show by a band named Auroranote, whose bass player is my friend Hironobu Hirata (he’s also Swinging Popsicle’s bass guy). It was at a club called Phase in Takadanobaba (meaning ‘Takada’s horse riding grounds’ – I’m too lazy at the moment to look up how the area got that name; in any case, there were certainly no signs of horses today).

It was my first time to see Auroranote live. They had a nice, rowdy, blues rock sound. If the bright, breezy guitar pop sound of the bands in Yokohama was like Spanish tapas, dainty morsels of music, Auroranote was barbecued pork from the American South, juicy, filling and flavorful. Auroranote was also fun to watch because they had a following of around forty young female fans who stood in front of the stage and threw their arms up at key song moments. 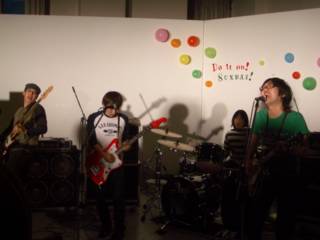