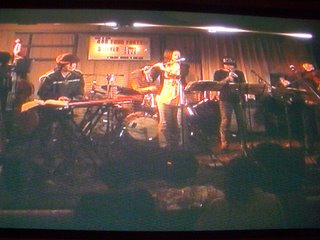 I went to a club called 440 in Shimokitazawa on Thursday night to see Three Berry Icecream, and there fell in love with a group I saw for the first time, named Little Lounge Little Twinkle (LLLT).

When LLLT came on, the third and final act of the night, I was at the back of the club with a drink in hand, focused more on chatting with friends than listening to the band. But then LLLT began playing, and my conversation, my drinking, my everything came to a halt. From their opening notes they grabbed my attention.

Little Lounge Little Twinkle, which is the musical unit of a guy named Shunsuke Kida, played what sounded like hip cinematic music, and, indeed, on the band’s website Kida lists Ennio Morricone and Michel Legrand as composers he respects (along with Burt Bacharach and the Japanese pop music composer Kyohei Tsutsumi). A friend compared LLLT to Architecture in Helsinki and Fugu.

One thing that thrilled me about this band was their instrumental lineup. In addition to Kida’s keyboards, a drummer and a guy on standup bass, they had a flute, viola and an oboe. An oboe! I’ve been to hundreds of rock shows in Tokyo, and this was the first time I saw anyone playing that oxygen-depriving double-reed instrument. And the ensemble sounded wonderful, combining the charms of movie music with the intensity of live playing.

When I think of bands in Japan trying new things, I think on the one hand of neo-Techno future pop groups like YMCK and Aprils, and on the other Out There eccentric ensembles like Limited Express (has gone?), the Boredoms and Melt-Banana. Little Lounge Little Twinkle doesn’t belong in either of these schools, but what they are creating is also new and lovely. A band to watch. 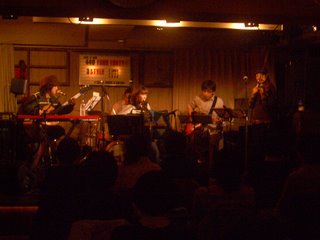 I think I have pretty varied taste in music: on any given night, you might find me at a punk rock show, listening to guitar pop bands or bopping to straightforward rock (not to mention classical, jazz, etc. etc.—music is music). But while, say, the explosive Japanese emo of a band like Eastern Youth always grips my heart, somewhere in the back of my mind I’m yearning to listen to a group like Three Berry Icecream, if I’ve been away from it for a long time. Three Berry is the musical unit of singer and accordionist Mayumi Ikemizu, who was once in the band Bridge with Hideki Kaji, and its music is quiet, bright and mellow.

Many of Ikemizu’s fans are those who grew up listening to 90’s Japanese pop bands like Bridge and Flipper’s Guitar. Her husband told me those mostly female fans, in their 30’s, don’t go to CD stores that much anymore, so Three Berry is selling its new mini-album, Rain Drops, in zakka-ya, shops that sell assorted little objects like candles, fancy boxes, photo stands, and so on. And I could see how Ikemizu’s songs would sound especially great in that sort of atmosphere. Ikemizu, by the way, is a true Tokyo indie music scene heroine, a mother of an adorable five-year-old girl, and a woman whose music has influenced many bands and who has continued with music and just released an album for the first time in six years.
Posted by Ken M - Japan Live at 7:48 AM