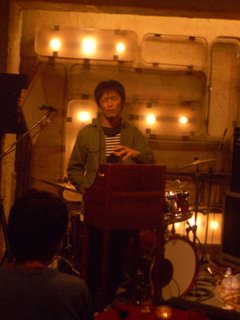 You’ve never heard about these bands I’m about to describe.

They are groups that are just getting started, and few know about them even in Tokyo. But they are neat bands that are worth checking out if you run across MP3’s of theirs or see them listed in a gig schedule somewhere.

One of these is the Yellow House Document, a successor band to Lost In Found, which disbanded earlier this year. Lost In Found’s vocalist Mike Matuszak, drummer Tetsu Saito and their lead guitar Dai stayed together and added a bassist to form Yellow House Document. They played their first show on Friday night at the bar Grapefruit Moon in Sangenjaya. Unlike Lost In Found, the new band doesn’t have keyboards or a horn person, and instead are in a conventional guitar-bass-drums rock band arrangement, and that made them sound more rock than Lost In Found’s indie pop sound. But it was clear Mike Matuszak’s ability to create catch pop melodies was intact, and I knew this group is one I’d be seeing more of in the future. They also guest-featured a guy playing the theremin, the instrument that uses two antennas and sound waves to produce whirring musical notes, and that added a 50’s sci-fi movie feel to the set. 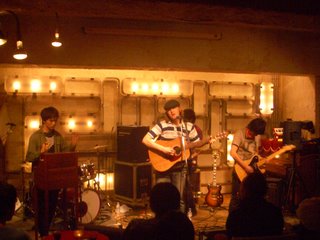 The other group is 4 Bonjour’s Parties, a group of multiple instrumentalists (the female vocalist played the flute, piano and a mini-accordion) who perform vivid but laid-back chamber music-like pop songs. Some of their tunes reminded me of Arcade Fire, while others were a bit like Galaxy 500. It’s gorgeous stuff (tunes can be sampled here and here), like streams of different colored instrumental sounds flowing together into a slow-moving river of music. And it was fun watching the seven musicians scramble around stage between, and sometimes during, songs to find the next instrument they needed to play (their guy vocalist gets extra points in my book for playing a clarinet). Recently, I also saw a band called Little Lounge Little Twinkle that, like 4 Bonjour’s Parties, uses imaginative orchestration, using instruments like the oboe and viola, to come up with a new pop sound. If this is an emerging Tokyo music trend, it’s a welcome one. 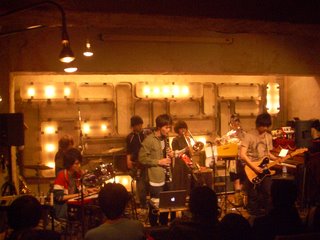 I had never been to the club Grapefruit Moon before, and as I walked over to it I almost wondered whether I took a wrong turn somewhere. You wouldn’t expect to listen to cutting-edge pop music on the street where the Grapefruit Moon is located: it’s an alley that has kept the look of Tokyo of several decades ago, with little stores selling fish and fruit and vegetables, while a public bath house is right across the street from the club. I like the idea of a rock club being in a neighborhood like this though. A live house in the middle of bustling districts like Shibuya, Shinjuku and Ikebukuro might attract more customers, but the Grapefruit Moon’s location clearly has more character and charm. 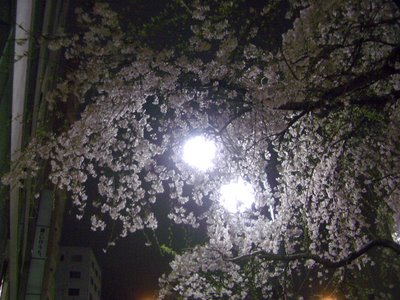