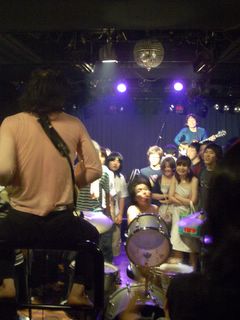 Watusi Zombie at the O-Nest.

I’d been to the Shibuya O-Nest only a few days earlier, but when I climbed down the stairs and entered the stage floor tonight, I was in a different world. Gone were the nice girls and boys playing guitar pop. Instead, on the stage was an eccentric punk band, the singer yelling into a mike covered with a Grand Buddha mask.

These guys were the Watusi Zombie from Osaka, and they were insane. Within a few minutes, one of the guitarists TWICE dove into the audience and crowd-surfed. For the finale the drummer jumped into the crowd carrying his drums, arranged the set on the floor, and started pounding on it surrounded by fans while a guitarist played standing on a railing (pictured above).

Next up was Melt-Banana, a noise/punk band I’d read about in Rock of Japan (they’ve visited the U.S. several times) and have wanted to see for a while. They were fantastic. The guitarist, wearing a gauze mouth mask the whole show, made freaky hyperactive guitar sounds, while the girl singer shouted out the lyrics like a rapper, in a high voice, and the band’s driving punk beats sparked mosh pit action. They were like Rage Against the Machine meets speed metal meets the Chipmunks.

Limited Express (has gone?), next, was the band I’d been most looking forward to tonight, because I’d seen a DVD recording of their show, and they seemed wild and intense in a fun musical way. The trio didn’t disappoint. The female vocalist/bassist, who wore a yellow tank top and tight denim shorts and had huge hair, would at one moment sing in the most rapid-fire Japanese I’d ever heard, then would scream in a strange, vibrato way, and then run from one end of the stage to the other, all the while playing the bass with total control. It’s hard to describe the sound—maybe, a cute, punk Captain Beefheart on speed?—but I was completely absorbed by it, and bought one of their CDs after the show. 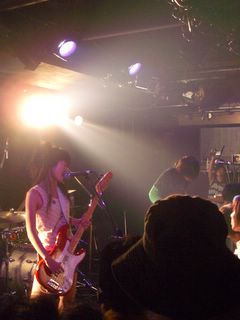 Limited Express (has gone?) at the O-Nest.

The event, which also featured Clisms (who I’ve written about before) and several other bands, was called, in Japanese, “Jyu-dai Boudou”, and toward the end of the show, I got to thinking about what that name meant. “Jyu-dai” is “teens”, while “Boudou” is “riot”. Teen…riot. Teenage, riot. Wait, Teen Age Riot! Like the song from Sonic Youth’s Daydream Nation! So this gathering of avant-garde, hard-rocking groups was some sort of homage to Sonic Youth. None of the guitarists stuck drum sticks under their strings, but neither does Steve Shelley carry his drums off of the stage to play among the audience as far as I know.
Posted by Ken M - Japan Live at 8:32 AM