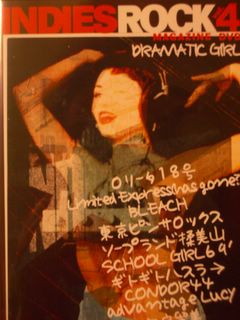 I think I would get along with whoever it is that chose the bands featured in the live rock show compilation DVD Indies Rock Vol. 4 Dramatic Girl.

First off, among the ten Japanese rock bands the DVD records is advantage Lucy. Anyone who has the vision and good taste to bring into the world a new video recording of the Tokyo guitar pop band must be a fine character.

But that’s not all—the person who chose the bands also appears to have an excellently eclectic love of Japanese bands. In addition to pop-rock bands like advantage Lucy, Condor 44 and School Girl 69, the DVD also casts the spotlight on purely punk groups like Lolita #18 and Bleach of Okinawa.

It’s a bit hard to explain how cool this is to someone who hasn’t spent some time in Tokyo’s huge but faction-oriented live music scene: you don’t usually run into people here who go to both advantage Lucy and Lolita #18 shows, even though both are great (if very different stylistically and in almost all other ways), so it’s a happy surprise to find a DVD like this with a full spectrum of Japanese pop and rock sounds. As the title Dramatic Girl suggests, the DVD seems to have compiled girl bands (like Lolita #18), bands with female singers (like Lucy), and bands with girl players (like Condor, which has a female bassist). But I don’t think it was the need to find group that include girls that resulted in this band line-up—there are plenty such bands—rather, I’d like to think it was a question of taste.

The DVD is a great primer on the music coming out of Japan. I’d never seen a Lolita #18 show until I saw the one on this DVD, for instance, and I developed a strong urge to go check out their next performance. The singer, with blindingly day-glo pink hair and a bright yellow shirt, is brilliant. She has a rough, whiney voice that travels during shows somewhere in the farthest frontiers where voiced words still count as singing. She has that manic look in her eyes that’s almost a cliché for punk rockers, as well as other punk conventions such as wearing red tartan trousers, but she’s so good at connecting with the audience you forget all that.

Advantage Lucy plays one of their oldest songs, Sunny, as well as one of their newest, Shiosai (which means ‘the sound of the sea’). It’s impossible to recreate on DVD the feeling of seeing these wonderful musicians up close, surrounded by their sound and their fans, but the disk still gives a sense of what their shows are like. At the center is Aiko, the singer, her eyes closed most of the time, absorbed in melodies of astonishing beauty.

I highly recommend this DVD, which is available on Amazon Japan (your DVD player needs to be able to play Japan region DVDs though).
Posted by Ken M - Japan Live at 8:27 AM