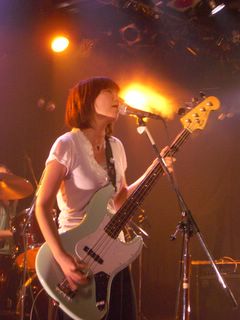 Pop Chocolat at the Que.

I’ve seen the makings of J-Pop superstars, and their name is Pop Chocolat.

Listening to the opening notes of the show by this gorgeous and brilliant three-girl band from Kyoto, I found my eyes well up with tears. It was as if my ears and brain instinctively knew they were in for an extraordinary rock music treat. And they were.

Looking like ordinary, giggly Japanese girls, Pop Chocolat nevertheless RIPPED when they started playing their music, which they call alternative girly-pop. They went effortlessly from crisp pop tunes to crashing rock passages, and all three sang beautifully too.

They also looked fabulous on stage. All three had short hair that didn’t quite touch the shoulder, and the guitarist and bassist played matching aqua-colored instruments.

The 30 minute-show ended much too fast. But at least I know there are two shows in Tokyo coming up in the next few weeks. I dashed to buy their first mini-album, which they were selling outside.

I better go see them again soon because if my premonition is correct, I soon won’t be able to see these superstars-to-be in a small club like the Que, as I did tonight. Of course, I may not be a very good judge of how well a band will do—Japan Live specializes in indies bands, after all. There’s something wrong with the world though if Pop Chocolat doesn’t enjoy at least some success. 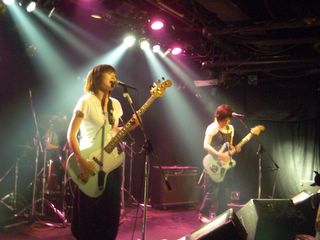