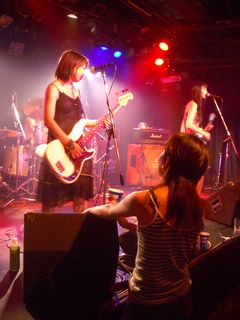 Sad news--the Clicks, the wonderful Japanese girl rock trio I've written about several times, are calling it quits. On their website's BBS, the group announced that they will split up after playing the rest of this year's scheduled shows. No reason was given for the sudden dissolution.

The Clicks will leave behind two splendid, spirited rock albums: Come To Vivid Girl's Room, and Magic Of White. I especially liked the second of those two albums, Magic Of White, which feels more mature and musically adventurous than the debut effort. But, really, both were great, and it's sad to think there won't be any more albums featuring these three girls harmonizing over simple but driving rock parts.

Bassist Chiharu, who is the unofficial spokeswoman of the band, says in her farewell message, "We won't be playing live anymore, but our CDs will remain. Even after we disband, if you could continue to listen to the CDs, that would make me happy."

I know I will.

For anyone who wants to catch the Clicks at their final shows, here's their schedule: