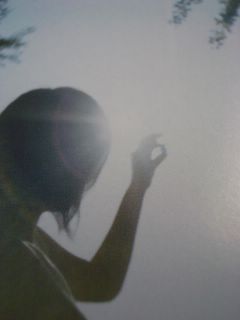 At their show on Sunday, advantage Lucy announced the release date of its new album, Echo Park: September 28. It will contain 11 songs. The album will be sold in major music stores in Japan, and should be available on Amazon Japan and other on-line shops in case you live outside of Japan.

The picture above is the cover of the album, photographed by graphic designer Akira Muramatsu, a long-time friend of the band. Lucy vocalist Aiko is holding in her hand a marble that is glittering in the sun. When the photo was taken Aiko's collarbone was broken after an accident, and this was as much as she could raise her arm without it hurting.

The show at which the release date was announced was completely packed--it was at the Shimokitazawa Club Que and it was sold out, partly because the band that they were playing with, the Castanets, are also popular. But I didn't mind the rush-hour commuter train feel of the club: the people around me were all Lucy fans, which means they can't be bad people.

To mark the release of Echo Park, Lucy will be playing solo shows at the Que on Sunday, October 30, and at a place called the Osaka Live Square 2nd Line on Sunday, November 6. Since more fans turn up to shows when only their favorite band is playing, rather than a group of bands, there's a chance these shows might be sold out too. So, if you're in Japan and are interested in seeing them (which you should--they're one of the truly great bands of Japan!), I'd recommend reserving tickets via e-mail from their website.
Posted by Ken M - Japan Live at 2:21 AM